Let me just start out by saying I was baptized at the age of 15 and know all about what scripture says about character. I grew up in the church (except for the occasional times we stayed home to watch Blondie and Dagwood and go for rides in our Town and Country station wagon to look at mansions in Mountain Brook followed by eating “Baseball Nut” ice cream at Baskin Robbins).  I was voted Most Poised by my 12th grade class and have the picture of me in the floral print, peplum dress with white stockings from 5 Points West and black shoes to prove it. I pride myself in being a lady and try with everything Godly and good within me to stay on top of my West Endian roots (yes, I’m from West End Manor, Birmingham, Alabama and with that comes a sense of, shall we say, “spice” that seems to settle on a West Endian girl:) Sometimes, with all of those factors it is still hard to stay Godly and good.

In today’s society with a growing trend of women fussing and fighting on television (and everywhere else), I wouldn’t dare judge others because judging is wrong. Plus, I don’t know their stories, struggles, exposure or environment. With all that said, there have been times in my life where I wanted to cuss, cut (as in three tires, not four so the insurance won’t cover it) and act uncouth. Through all the wild and wacky reactions I might have taken as a result of not being mature enough to handle other’s actions I’m thankful for God’s grace. I’m also thankful for the fact that I’ve developed a sense of knowing how to keep it classy when cussin’, cutting and acting uncouth are not an option. 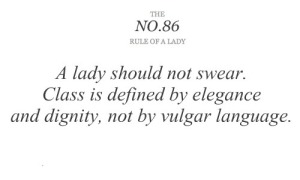 My divorce and the aftermath of handling lingering business was the most recent thing to test my West Endian heritage. Surprisingly, just a bit of it was directed toward my former spouse (as with any couple going through the end of a union, so don’t go TMZing in the mind or the mouth), but most of it wanted to be directed toward the fact that I was out of control of my life and anyone or any entity that I thought had some role in it. That’s crazy. I know! As strange as it may seem, while that was the most recent time I can remember (which was four years ago), it certainly wasn’t the most intense time I’ve had to keep myself in check or learn from times when I didn’t. (Trust me, there were times I learned through error. I flinch in embarrassment when I see a few of the victims of my inability to keep it classy). Situations in all forms of life have tried to get the best of me, as I’m sure they have many.

Not verbatim, but people often ask how I keep it classy or why I accepted that cussin’, cutting and acting uncouth are not an option. I’ve never, ever been a curser, but I had an uncanny way to being an undercover revenge seeker as if that were my part-time occupation.  Since I’m being honest, I’ll be the first to admit that I’d mastered seeking my revenge in a way that was so clever often time my targets didn’t know they were “gotten” until long after they were “gotten”.  I’m not proud of that at all, but learned a few things along the way. Put on your seatbelts and get ready for this “keeping it real” ride!

Here’s what I learned…

One thought on “How to Keep it Classy When Cussin’, Cutting and Acting Uncouth Are Not an Option”