This blog is in honor of #TBT (Throwback Thursday)

A cleaning journey lead to the discovery of my Senior Class book. Yes, I’m a neatly, organized packrat  who has always kept anything of value with the hopes of it one day making an appearance on my “behind the scenes of the life of this mega-important whoever I was to become” biography. So I super-glued it, hot-glued it and kept it in tact with a large rubber band (that might have come off of a bunch of collard greens my daddy might have been chopping one day in the late 80’s) and I saved it.

Ha! Taking a glimpse in the life of the teen formally known as Angela Michele (with one “l”) Scott tickled me! This girl was something else.  This 122lb, 5ft 8in, 17 year-old with a metal retainer, dark brown eyes and a precision cut, dark brown, asymmetrical bob (as her book stated) described herself as “nice, happy-go-lucky, easy to get along with and with a smart mouth that would get her in trouble from time-to-time”. Yay and yikes! Not much has changed in that regard. 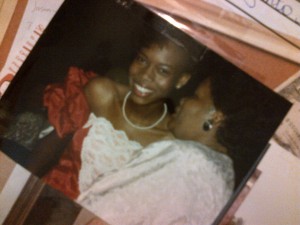 Ramsay High School’s Most Poised for the class of 1990 documented her life, favorite foods, fun times with friends, breakups, makeups and eventual breakups (sorry prom date for what I, I mean she, did to your picture, especially after you all went on to be great friends again). Of course Angela Scott had more pictures than the book could neatly contain. She also had a flood of what appears to be cryptic messages (i.e. hidden messages only her friends would have understood, nicknames of people who probably didn’t know they had those nicknames and “secret” stories that clearly should not have been in that book)  that baffled my mind at this juncture in life. Angela Scott also kept random pennies from 1990, report cards, greeting cards, graduation cards, concert tickets, party tickets, fashion and step show tickets, bowling tickets, Harvest Dance tickets, State Fair tickets, a copy of Life Every Voice and Sing and movie tickets, along with a Batman and Do The Right Thing button from her first job at Cobb Midfield Six Theatre. She had a couple of obituaries of friends she’d lost along the way, organized and stapled notes from Candygrams she’d received, and had labels from her hottest fashions including Levi, Generra, Nike and Polo. 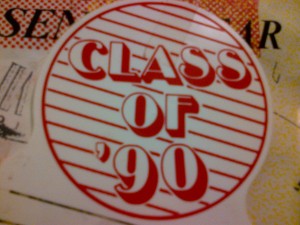 One page in the tattered book especially caught my eye. “Where Will I Be in 10 Years” was the question. Angela had it all mapped out, or so she thought. She would weigh more (definitely and darnit!), be working on a PhD (not so much), would have been married to someone rich and intelligent (I’m tickled and weak even as I type), would be driving a car that cost between $25k-$55k (didn’t happen) and would be a broadcast journalist (whew, at least one thing on the list made it to her life). Well, well, well, let’s just say that by the year 2000, which would have been 10 years from her graduation, none of that happened except the career as a broadcast journalist and she gave that up after a few years to pursue other things.

Where I thought I’d be is not where I am and that’s alright with me! I’m glad the hopes and dreams I had at 17 didn’t come true or were short lived, because what I gained from what I did actually live will last a lifetime. I am, however, so very grateful for the wisdom I got from Angela Michele Scott, that Fuddrucker burger and Quincy’s yeast roll loving, curfew breaking, school skipping, academically average student who was allergic to Fashion Fair make-up, was called “mush mouth” when she had braces, made lots of mistakes, loved her CG Doves (my high school sorority) and wore dresses even when others didn’t. I’m grateful for the little girl who even had the audacity to dream big, write it down and organize it, even if most of her dreams didn’t come true! I’m grateful that she loved hard, cried even harder, never stopped growing for the better, bounced back from adversity and at the core of it all always cared for others. What I’m most thankful for is that the same gumption to dream that was alive in that 17-year-old child still lives in this 41-year-old woman today.