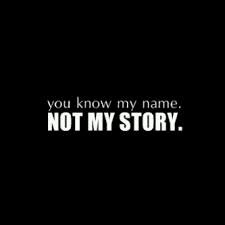 “You don’t know my story so you won’t understand my glory” is a phrase often heard. That, coupled with others like, “if they only knew what I’ve been through”, or “people have no idea what I’ve  gone through” have become common terms in our generation. Some may think those phrases to be catchy, or sound cute, but they’re starting to irk me like uninvited ants to a July 4th barbecue.

I have just one question, if people don’t know your story why don’t they? If we’ve been through it, come out of it, learned from it, moved past it, come from under it, grown because it, been rewarded due to it, or restored after it, why don’t they know our story?

It’s no longer good enough to walk around with a Hershey’s chocolate chip-sized morsel on our shoulders in response to people who don’t understand us, don’t get why we are the way we are, question why we respond in faith the way we respond, misinterpret why we do what we do, misunderstand the Source of why we live like we live or have what we have if we haven’t opened up our mouths to say something. I’ve seen too many Christians withdraw, become defensive and even go so far as to get a “fruit of the spirit-less” attitude because people don’t know what they’ve gone through to get to where they are and it’s simply because they haven’t shared what they’ve gone through to get to where they are. The Bible says, “let the redeemed of the Lord say so”. People’s lives are dependent on what we’ve already lived. I’d say it’s time we say so. 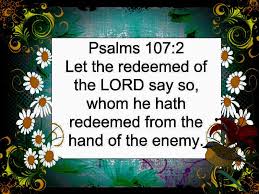