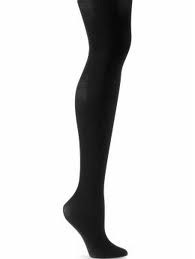 Call me a victim of “TMI”, but if sharing too much information will help me and help someone else I’ll just take my chances. I’ve got a run in my tights, my favorite tights.

They’re black, and were made with a bit of little reinforcement at the waist and thighs. They were designed by George (all my Wal-Mart shoppers know the power of George). They’re fit for someone tall like me, and have been a staple in my wardrobe for at least three winters. Look, don’t judge. I’m a creature of habit. Because I’m a creature of habit, I’ve had a hard time making the trek to Wal-Mart, Target or some other discount store, but have instead decided to hold on to them even though they no longer hold on to me like they once did.

I can’t seem to get rid of them. It’s like they have a cryptic hold on me that challenges me to throw them away. I’ve washed them more times than I can imagine. I’ve sown the toes in on both feet. I’ve resown the toes in on both feet. I constantly have to pull them up because that little reinforcement they once had at the waist and thighs has long since disappeared leaving a super-stretched mass of nylon that looks more like 1970’s Silly Putty on the lamb. And to top it all off, my dear, sweet tights now have a visible run in them that my “wet and wild” clear fingernail polish won’t be able to contain. And yet, as I type, I have them on, looking down at the run looking up at me and wondering why I can’t seem to part with them.

Why do I keep them? I don’t know. I want to know. I need to know. I’ve reckoned within myself, or at least tried to, that now, at the nearing end of the winter season I’d go out and buy a few pair of tights at a discount and throw my old faithful pair away. I still haven’t done it. Why? Do I think there’ll be a shortage of black tights for tall girls? Surely I don’t. Am I afraid that George is going to discontinue this particular hosiery collection? George would never do that. Am I toying with the idea that $5 to replace them will escape me? Definitely not. Even bigger than that, what does holding on to torn tights say about me? Do I have a problem letting things go? Do I hold on to things too long? And when will I finally make the big leap and toss my tights? Stay tuned. Garbage day is coming. I’ll be sure to share my story of tossing the tights so don’t run too far. Get it? Run? Ha!Ha! 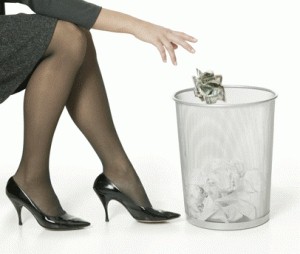