In April of 2014, a day spent at home waiting for the second round of horrible storms that had pummeled my Alabama region lead to an amazing creation and an even more amazing revelation.

Bored from the storm watch, and honestly tired of looking at television and in each other’s faces, my sister Kristy and I had a sweet tooth for a sweet treat. As if the brownies she baked the night before weren’t good enough she decided to use some “maturing” bananas to whip up what was supposed to be a Banana Loaf Bread. When she peeled the fresh fruit she realized that the bananas were far too ripe for consumption. (In the words of my two-year-old niece Kenna, they were “yucky!”) With only one good banana left she took to my parent’s pantry. She wasn’t too sure that what she would find would produce what she wanted, but she was certain that if anyone had it “Mama” would. A few ingredients she sought weren’t found, but what she discovered was just short of loaf-making magical. Nestled among the school snacks, toys, paper products, canned goods, recyclable newspaper, stored fine china and boxed dinners she found everything she needed to create two amazing loaves of baked undefinable deliciousness. With bananas, apple sauce, flour, baking soda, baking powder and a few other secret ingredients she took what, at first appeared to be a mass of nothingness and made something moist and memorable that permeated the house like high-priced, autumn-scented, Yankee Candle at your local Cracker Barrel. I watched her work in awe and waited in mouth-watering anticipation, while striking out on my own to dare to make a vanilla glaze to adorn the cake-like creation. The funny thing is that, as we worked and danced/strutted/sashayed around the kitchen as we often did, almost forgetting that we were in the middle of a literal storm, my Mama sat in certainty looking over her reading glasses and going on about her business, not at all surprised by what she had and what it provided. She knew. She’d known all along.

How easy would it have been for us to give up on the thought of being satisfied, having what we needed to have what we wanted. We were already in the middle of a storm, so settling for “life doesn’t get any better, especially in a storm” could have been our response. I’ll admit, that has been my response one time too many. Instead a little faith and a LOT of wisdom from a woman who was stocked for the (figurative and literal) storm offered us a true recipe for life.

The purpose of this post is to remind someone: Sometimes you have what you need and it’s been there all along. You just need the right kind of faith and the right person or people around you to show you what you’re working with, and what’s been waiting on you. So don’t give up. Go right ahead and “bake what your Mama gave ya”. 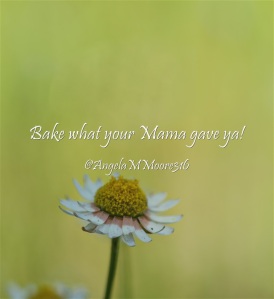 3 thoughts on “Bake What Your Mama Gave Ya”