Recently I had a chance to speak to some women at a women’s conference hosted by Voice of Faith International Ministries in Helena, Alabama. My topic was Life After Divorce. It still surprises me sometimes that this subject has been added to my arsenal of testimonies, especially since I thought I was already packing a pretty heavy punch. In other words, I didn’t ask for this.

It amazed me at the conference that more of the women than I’d imagined there had traveled the same journey as I. Their stories were familiar, their pain so identifiable, their words encouraging and their strength awe-inspiring. My time with them made me think of cake. 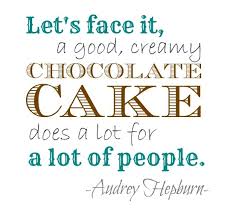 One thing I don’t often delve into is the fact that I fully plan on being a wife again. I don’t ever want to become or be seen as that woman obsessed with a man. I’m happy with where I am, but have hope regarding where I’ll end up. I look at it this way…My last stop on the love train was just a layover until my final destination. Anywho, my best guy friend recently gave me “the 411” on my past dating snafus and offered a little (tough) advice. He let me have it (yikes!) “Stay away from the pretty boys and popular men. They haven’t done you well. You need a good, real man who can put you first, put up with you, put you in your place (in a good way cause you’re spoiled), support your dreams, let you help him and still be the man,” he said. With that said, and with no prospect in mind I’d like to declare that my next man will be a chocolate cake man. What does that mean? Glad you asked. 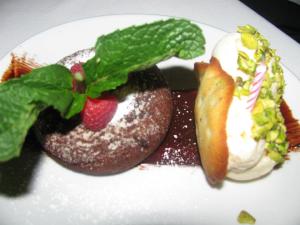 I have an affinity for food, especially food from fancy places. Flemings Prime Steakhouse is one of my favorite places to dine in Birmingham. They offer a Chocolate Lava Cake that is the business! This cake is so special in so many ways. (Not too oddly) it reminds me of the man I know God has for me.

There’s so much more I could say about this cake as it relates to who I believe is coming. I’ll hold that for another blog post at another time because I recognize and accept that I have had a tendency to get caught up in the cake and not focus on the feast ALREADY in front of me. So in the meantime, I’ll be grateful for where I am and plan my next trip to Fleming’s…LOL!