Recently I was lamenting to my sister about the status of my half bra. It hurts. I mean it Hurts with a capital “H”! In 2011 I was diagnosed with Lymphedema, the buildup of fluid called lymph in the tissues under your skin when something blocks its normal flow. This causes swelling, most commonly in an arm or leg. My Lymphedema just so happens to have happened in my right arm. (Check me out posing in the ATL a few years ago with my funky-fresh compression sleeve on and my badge of honor (that scar under my arm) of what I’ve endured.) 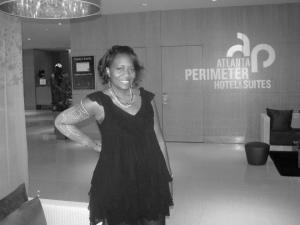 Since going through treatments, therapies, fads and new-fangled products I’ve been mostly healed of the disease. I manage it daily myself, and usually don’t have problems unless I’m flying or exercising (I have to wear a compression garment), when the seasons change, if I lift something too heavy, when I get extremely hot and when I wear that daggum half bra. 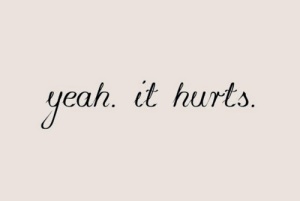 That bra, that beloved half bra, has seen me through cute times too many to recall. But it hurts. It hurts so very badly. So when I told my sister about the bra hurting me she said through her matter-of-fact face, “Well, just get yourself another one.” “I can’t,” I said. “It’s too expensive,” I complained. “It’s too hard to find my size,” I whined. Then again, in a matter-of-fact face which has only been intensified since she entered the world of motherhood she turned to me and said, “Oh well. Just keep on hurting then.” Boom! Just like that she shut me up, shut me down and reflected an attitude many of us take on in life.

Why was I willing to allow something to keep hurting me when I didn’t have to, especially when I was in control? All I had to do was buy a new bra. Simple. And plain. Why did I find every excuse possible to keep wearing the bra rather than just toss it and buy a new one. Sure, it’s going to be expensive. But so is physical therapy when my Lymphedema flares up. Sure, my “special” size is hard to find, but so are a lot of other things I might have scoured the internet, shopping malls and specialty stores for in the past. Sure, I don’t even wear that half bra that often but when I do I want to pull my weaved hair out strand by strand and that makes no sense. Sure I could just settle for what used to work, but it doesn’t work for me anymore so that settles it.

Bras and I have had an interesting relationship through the years. Because of my generationally transferred upper physique they’re one of those things simply not on the top of my “must have the fanciest and frilliest” list. I never really cared to know much about the importance of bras, especially as they are so instrumental in providing foundation and support. Much like my life, I’ve also had the tendency to invest more in things related to others than me, being a foundation or support, but not always investing in building my very own foundation and support.  I’d like to blame that one on genes too. (I hope they’re reading this…LOL!) That’s all changing now, thanks to the fluff and stuff under my right arm compliments of Lymphedema. I’m about to step my bra game and life game up. Just watch me…well, not really, but you get my drift.

5 thoughts on “My Bra Hurts”