Divorce is no laughing matter. Ask me how I know. But, what is funny are the little humorous nuggets which often come out of nowhere as one tends to deal with divorce, which often comes out of nowhere. I was talking to an old acquaintance recently about a rumor which must have been spread about my ex and me that I had no idea was floating around the mean streets of Birmingham. After all this time, I had no idea this was even one of the many things on the gossip radar. At first I was as hot as an outdoor fish fry in Arizona. After talking to some others about the “made up matter” I began to reflect on some of the hilarity which has ensued as a result of the repeal of an “I do”.  I even chuckled about the rumor and the absurdity of it all.

I remember a dear friend experienced her divorce a few years before mine. She was at her breaking point with the unwanted separation and actions of her ex and was about to go “Lifetime Made-for-TV-Movie” in a very public place. The repercussions would have been TMZ worthy I’m sure, but she was fed up and you know what R. Kelly said about a fed up woman. (There ain’t nothing you can do about it.) Thankfully, she called me on the phone as she was literally about to go all in. I did my best to talk her out of it.  Actually, I begged through her screams and tears, assuring her that one day she would look back at that day and laugh. She did. She eventually laughed hard, really hard. This was especially so when she sashayed all the way down the aisle with a great, new man a few years later. 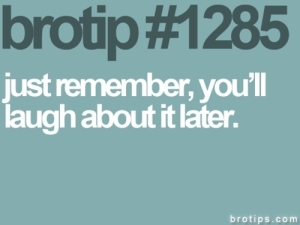 I shan’t go into the juicy deets, especially about the time a loved one had to be dragged out of the double doors of Best Buy when he/she saw my ex for the first time after he left or the time I drafted a five page letter to “tell on him” to the masses, (bless my heart). But let’s just say, there have been avoided incidents, initial reactions, and reconsidered actions, which are absolutely natural, but thank God, through his supernatural intervention were not to be so. Thank God. While, at the time of the pain they might not have seemed funny at all, they proved to become some of the most gut-wrenching, tear-jerking, snort-inducing, head-bobbing laughs of all. That’s the beauty of life. There are little gifts of unexpected goodness sprinkled in even the most difficult of packages if we only heal enough to make it through the process.

So hang in there wherever you are. You will get the last laugh, even if it’s laughing at yourself. 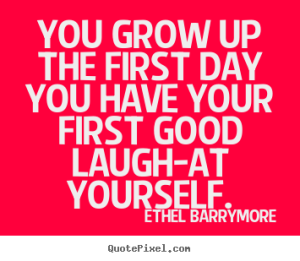 One thought on “Divorce 101: Get the Last Laugh”