Lately my “settle game” has been tested. Like a college student on edge with rapid fire final exams, I’ve been being faced with test, after test, after test on whether or not I would settle. From career opportunities I’ve mustered up courage and sense enough to say “no” to, to truly examining my deserved preferences in a mate, owning my pickiness and sticking to it like Elmer’s Glue from the 70’s (not this new-fangled stuff), even to knowing my financial aptitude right now and not budging from that budget, I’ve been serving up slices of “no settle” like nobody’s bees-wax.

Before I proceed let me just say I feel like, of late, I’ve been talking about relationships/boos and baes a lot on my blog. That certainly is not the center of my attention at the time, but the topic just keeps coming up in my circle. So while the frequent posts are not on purpose, they must somehow be. Anywho, I was talking to a relative about why we’re still single. She offered the notion that we’re just too “special” and there’s nothing wrong with that. We’re like that limited edition whatever it is which is worth waiting for. The same must be so for our boos because they are certainly taking the long walk home.

Anywho, again…I was also talking to an associate about another associate, who, by all accounts fits the bill in most of my “must haves”, especially the way he dresses. (Call me shallow. I care not…LOL!) Still, there were things important to me which were not present. So I’ll pass. Let me proudly say that the Angela of old would have overlooked those few, albeit important factors as she fatefully did in the past and settled only temporarily until it drove her NUTS because she knew better in the beginning. Not so now, honey. Not so now.

Don’t get me wrong. I absolutely know that there are things in life which occur by the gentle (or not so gentle) command of our caring God which cause us to do things which others, self included, might deem as settling. I’m not speaking to those things. If God almighty says it we have to do it. I’m referring to the things which we know without a shadow of a doubt are not for us yet we settle still. That’s not the business. That’s some trouble waiting to hijack your life’s story. 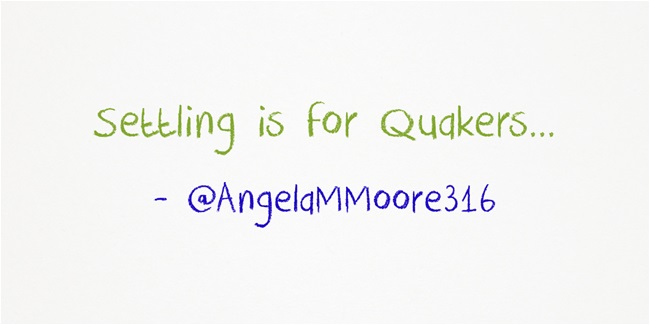 So I leave you with this as I hopefully graduate soon from Settling 401: The Advance Course. Settling is for Quakers. It’s as simple as that. Just because it worked for them doesn’t mean it works for you.